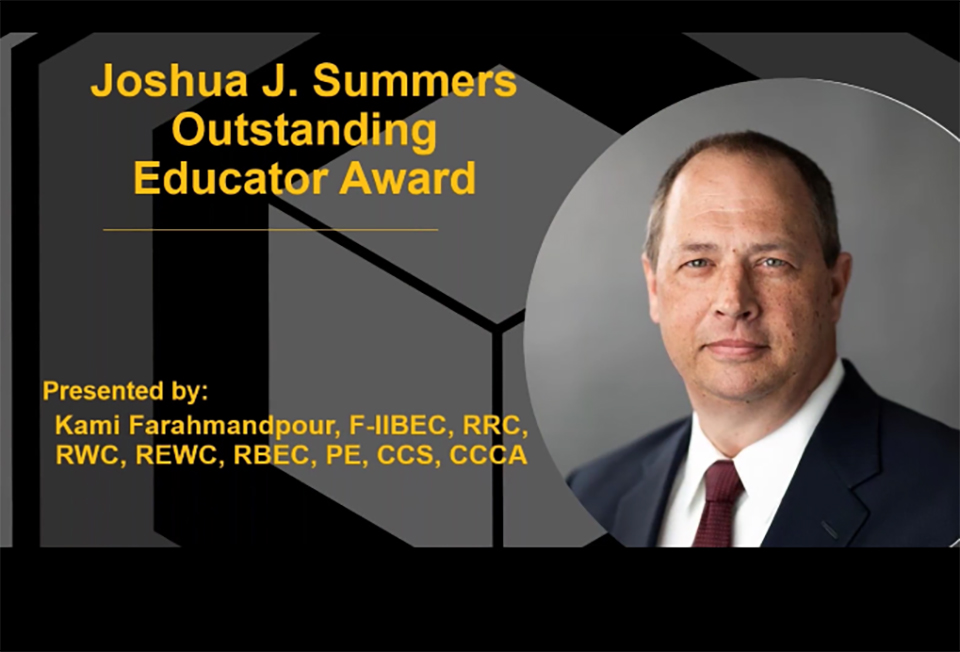 The International Institute of Building Enclosure Consultants (IIBEC) named its Outstanding Educator Award after BTC’s Principal, Joshua J. Summers at the annual IIBEC Awards Ceremony on October 7, 2020.  The award serves as an opportunity to recognize an outstanding IIBEC member who has contributed to the educational mission of IIBEC, and to the furthering of knowledge in the Building Envelope industry.  The award was renamed to honor Josh Summers’ long-term involvement in and contributions to IIBEC’s educational programs.  Josh frequently volunteered his time to travel the country and teach courses in areas such as exterior concrete and masonry.  A recipient of the Outstanding Educator Award in 2017, Josh was an active member of IIBEC, and served as the chair of the Education Committee from 2010 to 2020.

As BTC Principal Kami Farahmandpour describes, “Josh was a well-regarded structural engineer and earned the respect of his peers because of his knowledge, integrity and professionalism.  He took pride in what he did, and in everything he did – nothing short of a perfect work product was good enough for Josh.  He instilled these values in everyone he worked with.  I cannot think of a better way to honor Josh’s memory than to rename the Outstanding Educator Award to the Joshua J. Summers Outstanding Educator Award”.

A recording of the Awards Ceremony broadcast can be viewed on YouTube.  For more information and updates about BTC’s professional activities, follow us on LinkedIn.